Continuing on with discussion of:

In Part I, I discussed some issues with methodology, largely focusing on the reduced Run-In Phase that probably compromised the results irreparably.

In Part II, I highlighted a critical issue with the Run-In Stage, the objective of which was to create a somewhat homogeneous”reduced weight state” to test various diets in maintenance of the state.

The researchers seem to have made minimal adjustments, if any, during the Run-In Weight reduction in order to create a uniform outcome.  Rather, the result was a wide assortment of weight loss (5.6 to 16.0%, roughly 10.5% ± 5 percent ).

In the long run, I provide these scatter plots for all 105 subjects who successfully completed the study, for whom complete data for insulin measures and energy expenditure were available at all time points. 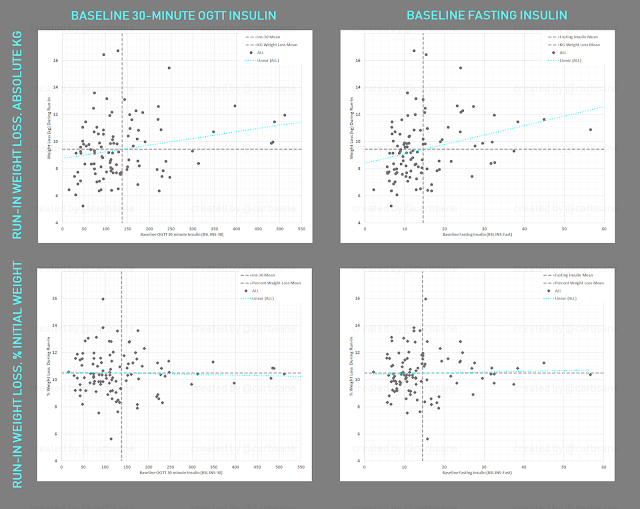 The Carb-Insulin Hypothesis (aka TWICHOO) forecasts that weight loss will vary inversely with insulin levels:  The higher the insulin levels, the lower the weight loss.  The Run-In Stage data supports no such relationship (indeed, if anything, absolute weight loss was higher for those with higher baseline insulin steps.

Meanwhile, differences in weight loss are easily explained by variation in caloric deficit throughout the calorie restricted Run-In due to coarse estimation of baseline energy expenditure (vs. rigorous measure).

This post expands on some relationships of baseline (BSL) and post-weight loss (PWL) steps as detected during the weight loss part of the Run-In Phase.

If you are reading this content on a site other than carbsanity.blogspot.com you are reading plagiarized material.
To read the original content in its entirety go to The Carb Sane-Asylum or if the connection has been stripped, search on the title and keyword carbsane in your favorite search engine.