Discussions on energy balance and diet haven’t improved over the years. Most of social media and even the medical literature pretty much conform to what’s called, in communications, half-duplex, and will create, as they say, more heat than light. What remains intriguing, however, are the scientific points associated with metabolic inefficiency,

The lipolysis (breakdown) step goes alone but to re-synthesize TAG constitutes an uphill reaction (requires energy) — it’s easy to break stuff. If you want to produce things, it costs you. So to put the fat molecule back together, you have to transform the fatty acid and glycerol molecules to make them more reactive. The actual substrates are glycerol-3-phosphate and fatty acyl-CoA that are more chemically reactive but you need to get the energy from someplace, so the synthesis of these compounds requires ATP. Glycerol-3-phosphate can be reached in the liver from the glycerol from a previous form of lipolysis but, in adipose tissue, the glycerol-3-phosphate comes indirectly from a set of reactions. It is currently believed that the major one is glyceroneogenesis, the truncated form of gluconeogenesis, even though some may come from glycolysis.

There is thus a steady-state that always readjusts amounts of fat and fatty acid. The key point is that the steady-state, like an equilibrium condition, does not mean that everything has stopped. Every time there’s a bicycle, TAG → FA → TAG,  however, energy is wasted — synthesis of TAG requires ATP, lipolysis is spontaneous and no ATP is re-syntesized. Why would such a thing evolve? The common name of the process is substrate cycle but because every cycle wastes ATP and accomplishes nothing — you get back the substrate which you started with — it has been known as a”futile cycle.” Why would the adipocyte waste energy in this way?

The energy in the TAG-fatty acid cycle is not really wasted even though it seems that way . It improves overall efficiency. The cycle modulates the availability of energy to the body. As such it must have the ability to respond to differing conditions rapidly. Regulation is easier if competing reactions are preserved in a cycling steady-state and then biased in one or another direction. This becomes, in the long run, more efficient  than starts and stops in response to different problems. 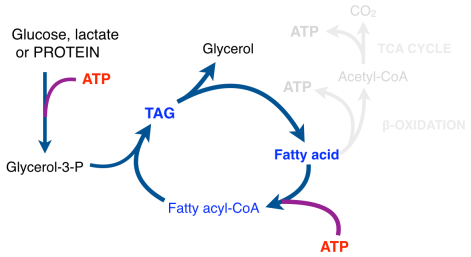 I usually describe, as an analogy, how, if you walk past a bus station, you might see that the buses are parked with their engines idling. Probably less common now than it used to be, the explanation was that it is tough to begin a diesel engine and it’s more efficient to allow it to idle and then place it in gear.  Fuel costs and engine designs have changed since the analogy first occurred to me so I checked online. There is now some controversy and some of the discussion is reminiscent of Marissa Tomei’s testimony in My Cousin Vinny but it’s still true that it is normal to allow diesel engines idle when parked for reasonable intervals. Diesel engines don’t have spark plugs and rely on high compression and generate high temperatures. It’s costly to start and stop the engine repeatedly.   The analogy is that is more efficient to run a cycle of metabolic reactions and readjust which direction you want it to go in than to start and stop.

The point is you will store various amounts of fat based on the number of cycles you run in a specific amount of time. For weight reduction, of course, you hope to run as inefficiently as possible (relative to fat storage. The “wasted energy,” however, is significantly less than if you had a lot of stops and starts.

If the approach is simple, that is, if only lipolysis is happening, then the stoichiometry (balance of reactants and products) should be 3:1, three fatty acid molecules for every glycerol released.  If, however, the fatty acid is re-processed, less or more fatty acid will appear in the blood compared to the amount of glycerol that is produced. You can then calculate the speed of biking 3x (rate of glycerol appearance) – (speed of FA look ).

The speed of cycling is increased by feeding, turned on by adrenergic stimulation (norepinephrine), caused by glucagon and turned off by insulin. 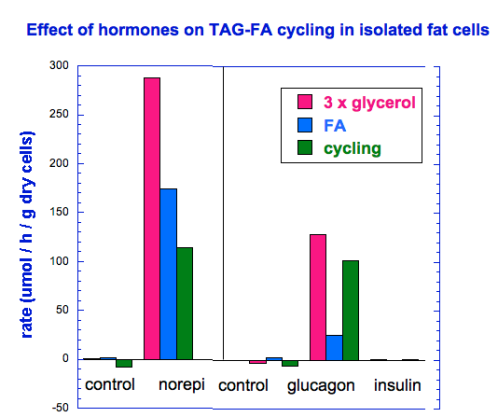 Whether, and to what extent this amounts into metabolic efficiency and CICO appears to be a good question. Anyhow, here’s picture of the main inputs and outputs: